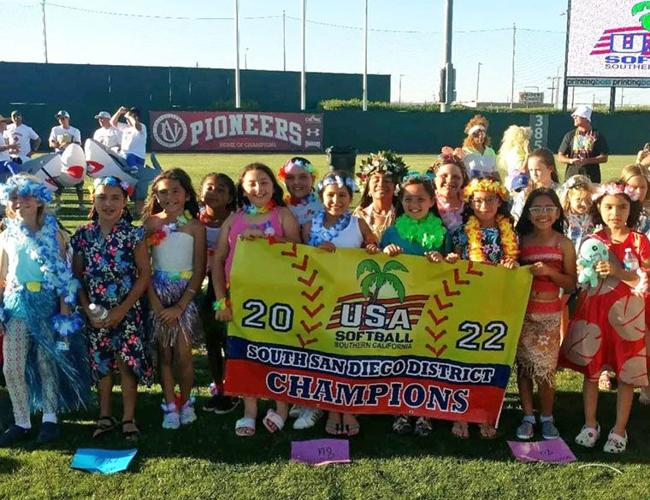 The IB 8U All Star softball team won the South San Diego Championship this year and will head to Regionals. 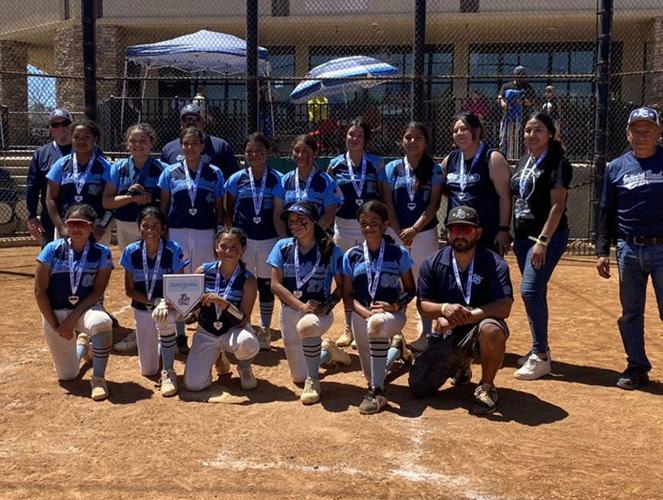 The IB 12U All Star softball team placed fifth in the State Championship and will head to Nationals.

The IB 8U All Star softball team won the South San Diego Championship this year and will head to Regionals.

The IB 12U All Star softball team placed fifth in the State Championship and will head to Nationals.

For Chuck Thurman, president of the Imperial Beach Softball League, the coaches and players, this year had been an exciting time. “It’s been one of the biggest year we’ve had in the last 10 years,” he said. The All Star 8U (8 and under) and 10U (10 and under) teams recently won the South San Diego Championship, while 12U (12 and under) got second place. “We’re doing well this year,” said Thurman.

The 8U, 10U and 12U recently participated in State Championships over the Fourth of July weekend. The 8U team got 5th place out of 31 teams, 12 U also placed 5th, and the 10U got 7th. Now 8U and 10U head to Regionals held in Santee the weekend of July 15-17 and the 12U will be at Nationals in Corona July 26-31. “We’ve had a solid group of girls that have been there for a while, then we added a few extra girls, [the results are] all up to the coaches, the girls and the parents,” he said. Thurman has been a coach for a number of years. He started in 1980 when softball was a part of Little League and has been the president of the IB Softball League since 2016. He said the girls that play in the league are mostly from Imperial Beach, South San Diego, and a few come from National City and San Ysidro. After this weekend’s double elimination tournament held at a Minor League stadium in Lancaster they advanced to State and the girls performed well.

Victor Orozco, manager of the 8U team said there were three returning players on the team from last year and the league has had a team in the Southern California State Championship before, so three girls have done this twice. Orozco said his team played five games and lost two and that was enough to qualify for Regionals. What is the plan now for the team to get ready? “We’ll keep practicing, work on some stuff to get better results,” said Orozco. “The girls are proud of themselves.” Orozco’s daughter Viviana, 9, plays on the team as a pitcher. She said she practices every day either with the team or one on one with her dad. “I’m excited about the placement…We’ll prepare for it,” she said. Viviana has played with the league for the past two years. She was inspired to play softball after watching Dodgers’ games with her dad and has now played for the past four years.

Orozco enjoys seeing the girls’ faces after a win. “It’s all about them…I like [to] watch them improve,” he said.

12U Parent Sergio Godinez is happy with the team’s performance. “We’ve never been there before. We got 5th for the first time in 10 years,” he said. “They did amazing. The girls are excited to go to Nationals,” he said. The 12U team will practice every day, after a few days break since this latest win. “We’ll work on improving. We have a plan,” he said. His daughter Camila, 12, is also a player on the team and she started at 7 years old. His daughter and her team are excited and looking forward to Nationals, he said.

Vanessa Gutierrez is the mom of Samantha, a 10 year-old pitcher in the 10U team, Samatha has been playing softball for five years now. She started playing T-ball at 4 years old. “She has been working very hard. She started pitching last year and she really picked it up,” Gutierrez said. Now her team is headed to Regionals. Samantha said she has been practicing four to five days a weeks for two to three hours a day. She and her team did not expect to do so well and head to Regionals. “I thought we were only going to Lancaster, that’s it… all of us are excited..we’re working extra hard,” she said.

Sorry, there are no recent results for popular articles.