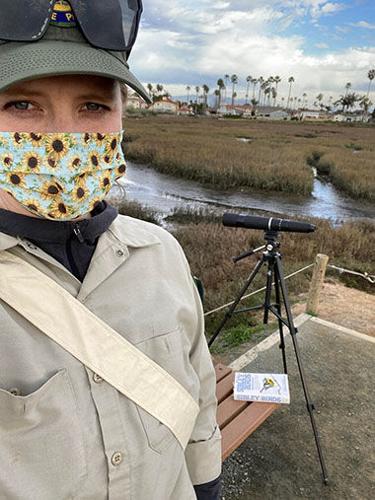 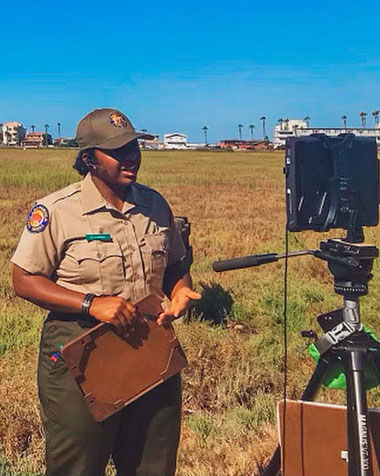 Empress Holliday is the new education specialist/researcher at the TRNERR.

Empress Holliday is the new education specialist/researcher at the TRNERR.

Two young and enthusiastic women recently joined the team of the Tijuana River National Estuarine Research Reserve (TRNERR) and are ready to go back to pre-pandemic programs. Empress Holliday and Kelley Hubbard are the new faces you’ll encounter in and around the visitor’s center. They are both passionate about their jobs and the environment, and feel they are working their dream jobs.

Hubbard grew up in Imperial Beach and is a graduate of Mar Vista High School (MVHS). She was hired for the State Park system and worked in South Carlsbad, but she had an eye on a State Park job in Imperial Beach. “I dreamed of this position and wanted to work in education…I have a background in early childhood and outdoor recreation. I wanted to get my foot in the door with the State Park while living here, and waited until the dream location popped up,” she explained.

A year later Hubbard’s wish came true and she was hired to work in education outreach and reopening the visitor’s center. Her duties now include hosting scout groups, being a roving interpreter, and special programs, including an Alzheimer group. Hubbard holds a number of programs on Saturdays and Sundays as well.

Hubbard has a 2-year-old daughter at home and she believes that if she spends time away from her she wants to do something she really likes. When asked what she loves about her job the answers comes easy to her.

“What don’t I love? I love the ecology, the rehabilitation… I watched [the estuary] from being a dump to something people love,” she explained.

Hubbard talks about the 1980s, although she was not born yet, and how that period was instrumental in making a change in the estuary, and how humans affect nature and vice versa. She believes that instilling that value in young kids is very important, and that small changes can make a difference even in a big community.

She can hardly believe the improvements that have been made to the estuary making it what it is today. “To think that I got to watch this place change. I was born in 1990 and watched it in disarray, over decades people invested their love and care…that was inspiring to me,” she said.

Hubbard has fond memories of going to the estuary, attending the Junior Ranger program and being inspired. She feels that the fact that she was a student in the Poseidon Academy at MVHS led her to where she is today.

Taking over 24-year employee Marya Ahmad’s job of education specialist/researcher, Holliday is filling big shoes but she is definitely up to the task. Holliday lived in Imperial Beach for number of years growing up and attended Berry Elementary and Mar Vista Middle School. She was first hired this past August, working mostly at Silver Strand State Park as an interpreter and focusing on getting the park up and running again, until the current position opened.

Growing up Holliday knew she was going to get a college degree someday, but was not sure in what field. She discovered geography while taking classes at her community college. “I knew I wanted to do something related to the outdoors, environmental law, science. When I got to college I had to take an entry level geography class,” she recalled.

That class made her realize her calling. “This is what I want to do for the rest of my life…with geography you get to sample every other discipline…geographers are problem solvers…that led to my Master’s degree and thesis research…I knew I wanted to work with kids and the environment,” she said.

Holliday was familiar with the estuary and visitor’s center because her thesis was on the impact of water pollution on young people. During her research she interviewed students at the Poseidon Academy, members of the Border Patrol, engineers from the International Boundary and Water Commission, and researchers who are now her co-workers at the estuary.

When she finally graduated in June 2020 it was at the height of the pandemic.

“No one was hiring. It was the worst possible time,” she said.

But she lucked out and was hired for one semester at San Diego State University to lead a community outreach program. Being familiar with TRNERR she also had an eye on a job with the California State Park system where she applied but was told no positions were available. Another opportunity came up and Holliday was hired at the Old Town State Park for a Public Humanities Fellow pilot program.

In that position she worked with a small team doing research and looking at the history of settlers of the area who were not just White, but Pacific Islanders, Asians, Black Americans and Kumeyaay. The stories the team discovered were then incorporated in the employee training, so that they can be shared with the public. When that job ended she was hired at the San Diego Zoo as a tour guide, but shortly after she heard from TRNNER that a job was available.

“When I came back it was strange, it was whole circle moment. I used to live down the street. I grew up wanting to leave, but now I have a whole new level of appreciation,” she said.

Holliday enjoys her job because of the variety of things she gets to do - field work, interpreter working with children, answering questions, providing information and looking at the environment and climate.

“I like that people come here from all over the world, the state, and the city. One of my favorite things to hear is ‘I didn’t know this was here.’ Coming to Imperial beach no one expects for this to be here, a nice wetland, with no road or railroad [going through],” she said.

Holliday loves that through some programs she can reach out to students from all over the world, and can show how anybody can reach their goal.

“Many in this field don’t look like I do, but you don’t have to look a certain way. I made my way because that’s what I was passionate about,” she said.

Sorry, there are no recent results for popular images.