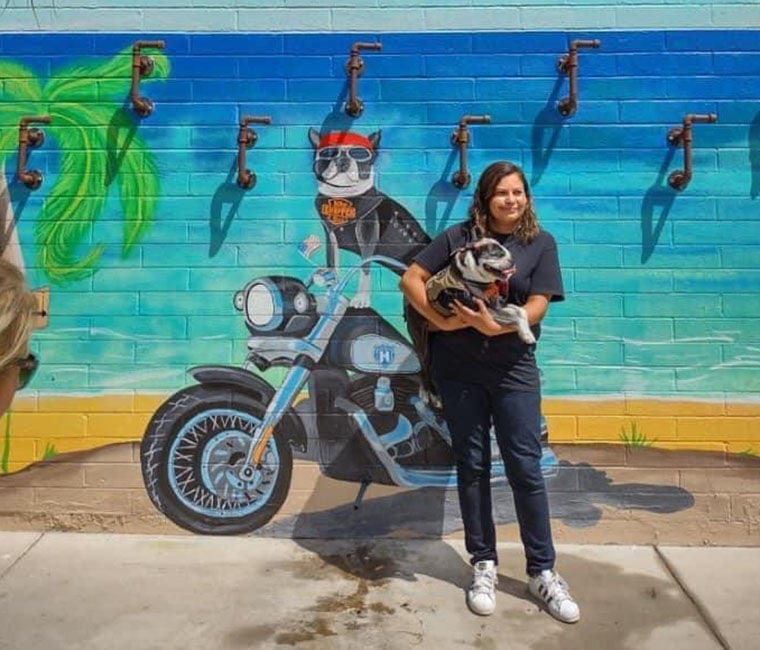 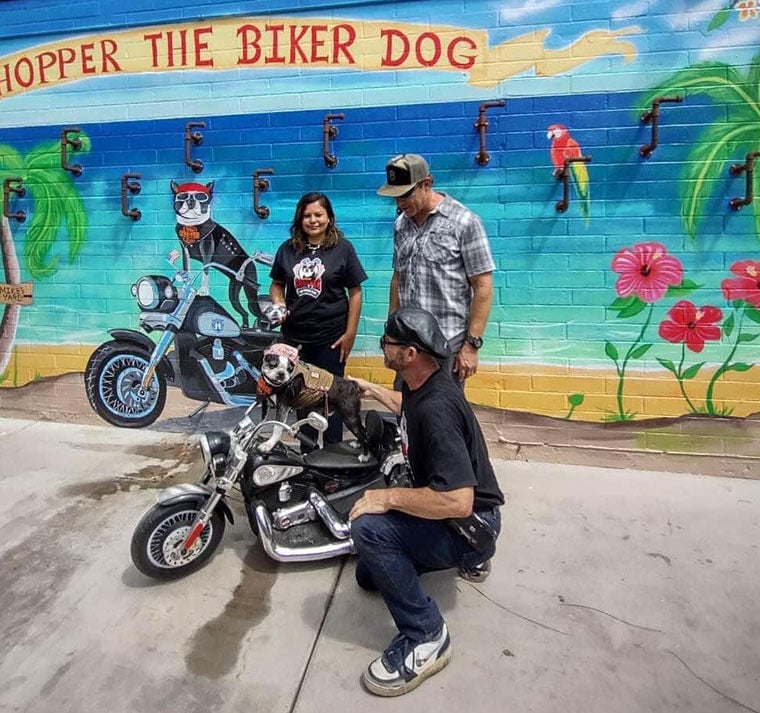 A year ago, artist and Imperial Beach native, Esmeralda Robles decided to paint a mural of Chopper, the biker dog. Robles wanted to validate the work of Chopper and his owner Mark Shaffer who spent hours visiting patients in various hospitals in San Diego hospitals to bring cheer. Her dream finally came true when the mural was unveiled on Thursday, Aug. 19.

“When I went to Chopper’s 11th birthday party I knew I had to make a painting of this dog. Mark, the owner, is a real estate agent by day and after work he volunteers and visits hospitals with Chopper,” said Robles.

She first asked Shaffer for permission to create a mural of his dog and then Robles started saving money, planning for the project. Her next challenge was to find a wall.

“I was looking for a good spot, not a random wall because he’s pretty special,” she said.

She had a list of 20 to 25 possibilities and went to those locations to ask permission from landlords, but did not have much luck.

“I was losing hope. I’m not a good speaker when it comes to promoting,” Robles said.

Since she is a member of IB Arts Bureau, she contacted the organization, which helped her get in touch with Mike Hess and was offered the Mike Hess Brewery south wall as a location for the mural. When Hess asked to see a sketch of the mural, Robles was in Mexico and she only had lined paper and a pencil available and did what she could to show her idea.

“I already knew I was doing [Chopper] on his bike, with a banner…I put palm trees and told him I might add some flowers so it wouldn’t be too blue and green,” Robles recalled. The mural was approved.

Robles first met Chopper at a fundraising event and began following him on social media and attending his birthday parties. At Chopper’s last birthday party on Aug. 3, Robles asked herself why she was so focused on creating the mural. “I realized I admired him. There should be more people in this world making a difference in people’s lives,” she said.

While she created the mural - a project that lasted two weeks - Robles spent as much as 11 hours a day painting. “I put my heart and soul into it,” she said.

Sometimes she wouldn’t stop to eat and only drank pitchers of water. The final mural is very colorful and eye catching with ocean in the background, palm trees and plumeria and hibiscus flowers, because she loves Hawaii. Robles explained that the background of the mural could be the edge of Sunset Cliff, Children’s Pool in La Jolla or even Hanauma Bay in Oahu.

This mural is not the first public art piece she has created. Two years ago Robles painted the outside of the Silver Strand State Beach tunnels by the Coronado Bay Loews Resort. There she created a kayaker on the surf and two kayaks on the beach. Robles has painted murals in private homes like the 36 tropical plants in a backyard, and one at Bodyworks Collision.

Her break as an artist came when in 2014 when she was one of 10 winners in a contest with the theme, “Why do you love San Diego?” through the NBC local channel. She created a painting of dogs on a surfboard which was displayed on Broadway in downtown San Diego for a year.

Robles recalls her mother taught her to draw when she was 6 years old using colored pencils and Q-tips for shading. Sometimes her mom would take her to work on Saturdays.“My mom was a designer for SDG&E. I remember she was drawing on a big drafting table and I would be drawing on another drafting table,” she said.

Robles admired her uncle’s drawing abilities and asked him how he learned to draw. “He told me ‘practice drawing everyday for one hour.’ I was 8 years old. If he had told me that at 15 years old, I would have said ‘Yeah right,’” said Robles.

Following his advice, Robles’ talent was obvious to everyone by the time she was in seventh grade. “Instead of doing schoolwork I’d draw in the classroom,” she recalled of her time at Mar Vista Middle School.

Her now stepdad recognized she had talent and encouraged her mom to sign her up for the San Diego Airbrush Academy. “I was the youngest student,” she recalled.

In 11th grade during a drawing class, the teacher told her she couldn’t teach her. “You’re too advanced you have to create your own assignments,” Robles recalled.

When Robles, now 43, graduated from Mar Vista High School she received acceptance letters from art schools including the San Francisco Art Academy and Otis Art College. Robles decided to stay local and attend Southwestern College instead. She was surprised by the letters because she had not applied to those schools and suspected her teachers had done that for her.

Robles spent $480 of her own money to create this mural and she couldn’t be happier because she feels Chopper deserves it. Unfortunately, Chopper has not been in good health lately since he was diagnosed with liver cancer but he and his owner made sure to be at the unveiling of the mural.

Robles’ social media shows many of her art pieces including a little library box with the Shel Silverstein’s Giving Tree theme. To see more of Robles’ art, log on to Artist Esmeralda on Facebook and artist_esmeralda on Instagram.