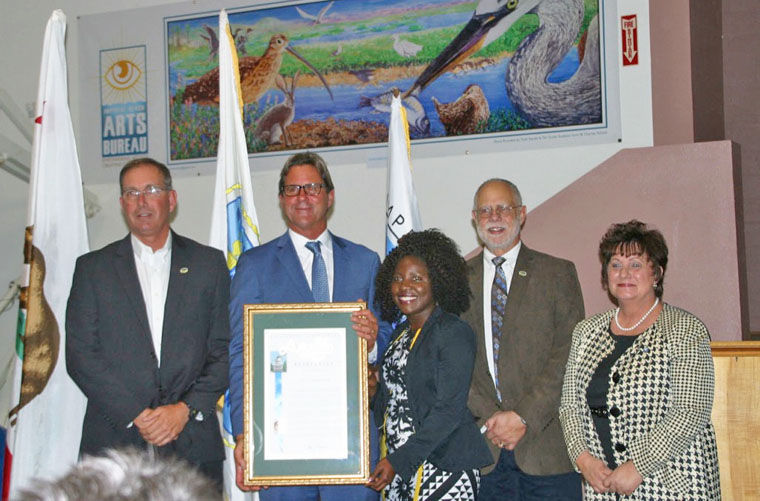 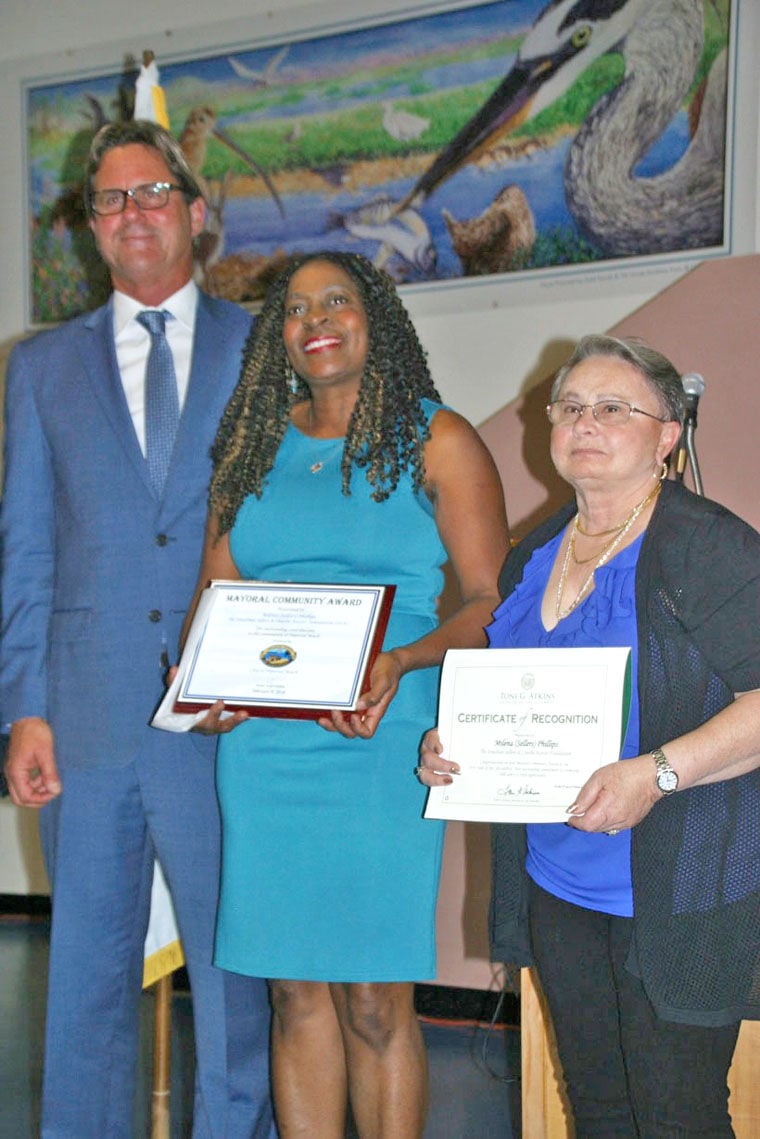 Mayor Serge Dedina with awardees from the Jonathan Sellers & Charlie Keever Foundation during the State of the City Address and Mayoral Community Awards Celebration held on Monday Feb. 8.

Mayor Serge Dedina with awardees from the Jonathan Sellers & Charlie Keever Foundation during the State of the City Address and Mayoral Community Awards Celebration held on Monday Feb. 8.

The second State of the City Address and Mayoral Community Award Celebration by Mayor Serge Dedina held Tuesday, Feb. 8, started with an invocation by Pastor Jody Crawford followed by the presentation of colors by the Mar Vista High School Junior ROTC. The event took place in the Boys & Girls Club’s gymnasium.

Port Commissioner and I.B. resident Dan Malcolm introduced Dedina saying he is the best dressed and coolest mayor but more than that he is a hard working mayor and a credible voice regionally and statewide. A Channel 10 video clip was shown of Dedina, City Manager Andy Hall and Assistant City Manager Steve Dush jumping the fence of a property on Seacoast Drive to clean up trash.

During his address Dedina pointed out five major achievements in 2015:

Increased city’s fiscal responsibility with taxpayers’ dollars. On this issue he commented the city and its annual audit. Last year there were seven findings in the audit, this year the number was zero and he also pointed out $41,000 in savings and 763 business licenses issued;

Improving neighborhoods in the city. Some of the improvements included one mile of alleys paved, 36 new street lights installed, and the safety of 13th Street where most kids and families live;

Imperial Beach has the second lowest crime rate in the county thanks to the Sheriff’s Department. He also praised the Fire Department and Chief John French for El Niño preparedness, and the lifeguards who did 600 ocean rescues. Dedina also pointed out the city had a record 3.3 million visitors this past year;

Eliminating blight. “We are committed to remove all chain link fences, improve the bay front, have a more equitable code enforcement.. and a more fair approach to eliminate public and private blight,” he said.

Dedina talked about the new upcoming projects in the city which include the Bayshore Bikeway, Bernardo Shores, Breakwater Town Center, Citymark project, Seacoast Drive Hotel and the new library. He also said the city had to work with Coronado, the US Navy, Caltrans and San Diego to synchronize the traffic lights to improve traffic flow.

“Thanks to the Port of San Diego we are turning construction fences into art,” he said. He pointed out that the fence at the side of the proposed hotel on Seacoast Drive is one site where seventh graders, thanks to the newly formed Imperial Beach Arts Bureau, transformed the fence into a piece of art.

Dedina also spoke of the upcoming Fiesta del Mar which will be held in conjunction with the City of Rosarito, the MJ Race which will travel through Imperial Beach and the possibility of hosting an Iron Man competition and a Cross Fit competition. “We will continue to improve the quality of life in IB, continue to work as a team,” he said.

Chevelle Newell of the office of Assembly Speaker Toni Atkins presented the city a certificate in honor of the city’s 60th anniversary.

An award was also presented to Milena (Sellers) Philips of the Jonathan Sellers & Charlie Keever Foundation whose mission is “to promote the safety and well being of children through education in preventing abduction and exploitation, and provide support for families who‘ve lost a loved one at the hands of another.”

Ken Blinsman president/chief executive officer of The Boys and Girls Club of South County also received an award. Dedina spoke of the club fondly. He said as a child he spent many hours at the club and made his best childhood memories there. He praised Blinsman and his team for providing a safe and positive place for kids in Imperial Beach.

Good to know that, Mayor Dedina Gives Second State Of The City Address also at essayyard.co.uk. I wish I could have attended the event too, sounds like it was great, all of them the ending sounds most tempting.

Your article has piqued a lot of positive interest. I can see why since you have done such a good job of making it interesting. web marketing

Truly an incredible expansion. I have perused this heavenly post. A debt of gratitude is in order for sharing data about it. I truly like that. Much appreciated so part for your meet.
Sexual Questions

Precisely, you're exceptionally sort of us about remark!.
Questions to ask your crush

Precisely, you're exceptionally sort of us about remark!. Questions to ask your crush

Keep doing awesome read few posts on this site and I imagine that your online journal is exceptionally fascinating and has sets of phenomenal data. Serious about you

This substance is composed extremely well. Your utilization of designing when mentioning your focuses makes your objective facts clear and straightforward. Much obliged to you. hacker team xbox live gold free games

I am happy to find this post Very useful for me, as it contains lot of information. I Always prefer to read The Quality and glad I found this thing in you post. Thanks gst registration online

Your online journal gave us important data to work with. Each and every tips of your post are wonderful. You rock for sharing. Continue blogging.. 100 Questions

Your web journal furnished us with significant data to work with. Each and every tips of your post are marvelous. You're the best to share. Continue blogging.. Make Him Desire You

Somebody Sometimes with visits your web journal consistently and prescribed it I would say to peruse also. The method for composing is phenomenal furthermore the substance is first rate. A debt of gratitude is in order for that understanding you give the perusers! 20 Questions

I discovered this is an instructive and fascinating post so i suspect as much it is extremely valuable and proficient. I might want to thank you for the endeavors you have made in composing this article. alif laila part 1

A debt of gratitude is in order for a magnificent offer. Your article has demonstrated your diligent work and experience you have in this field. Splendid .i cherish it perusing. holm law group san diego

Oh my goodness! an incredible article dude. Thank you However I am experiencing situation with ur rss . Don’t know why Unable to subscribe to it. Is there anyone getting an identical rss problem? Anyone who knows kindly respond. Thnkx valentine week

Great information, better still to find out your blog that has a great layout. Nicely done
yahoo

Rather than produce the same old content you have taken this subject to a whole new level . Kudos for not following the standard writing crowd.
marketing 1on1

Your article has proven useful to me. It’s very informative and you are obviously very knowledgeable in this area. You have opened my eyes to varying views on this topic with interesting and solid content.
vaping

Often the Are generally Weight reduction plan is unquestionably an low-priced and flexible weight-reduction plan product modeled on individuals seeking out shed some pounds combined with at some point maintain a far healthier your life. la weight loss
mobilee scam

You got a very fantastic website, Glad I observed it through yahoo.
https://youtu.be/5VapixQfy2k

Thank you a bunch for sharing this with all folks you actually recognise what you are speaking about! Bookmarked. Please also consult with my website =). We may have a hyperlink trade agreement among us!
Escort Girls Service in Dabri Mor

weight loss is sometimes difficult to attain, it all depends on your motivation and genetics-
بهترین وکیل تهران