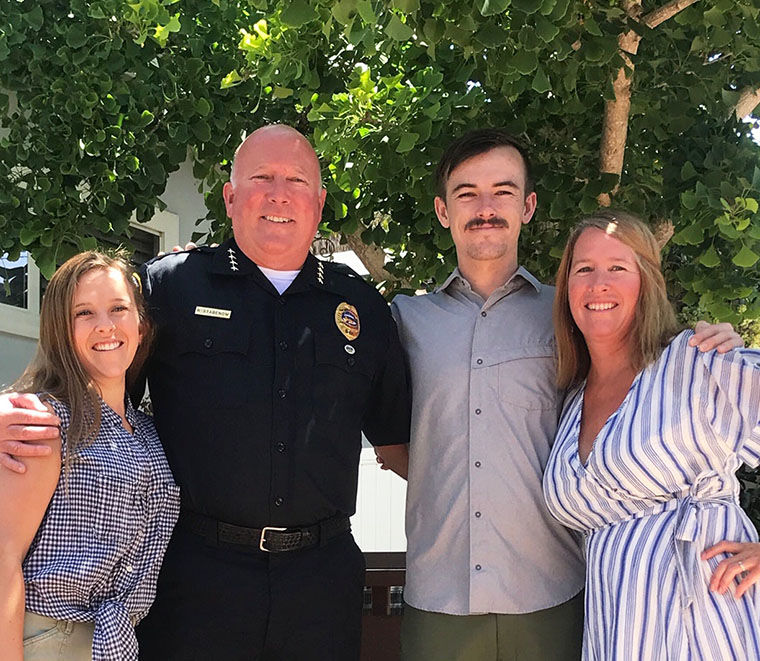 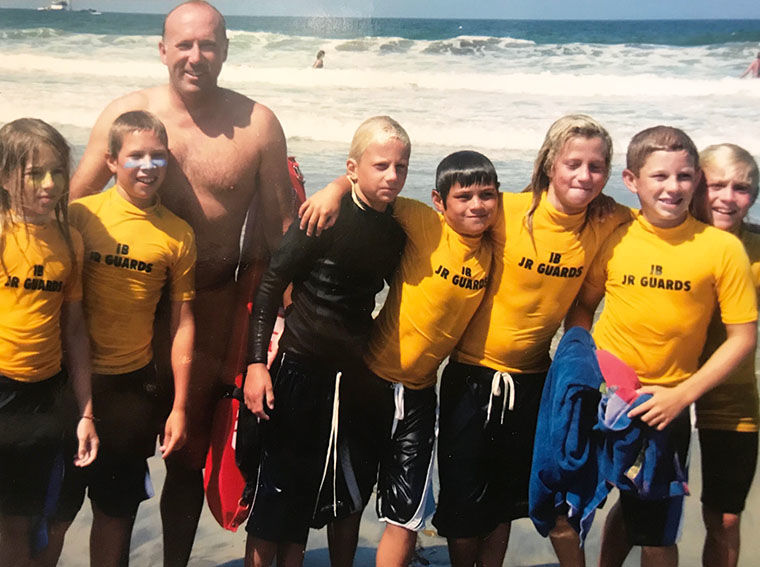 Marine Safety Chief Robert Stabenow with children of the Junior Lifeguard class. He recently retired from his position after 26 years.

Marine Safety Chief Robert Stabenow with children of the Junior Lifeguard class. He recently retired from his position after 26 years.

Robert Stabenow started his career as a seasonal lifeguard in 1983 when he was 18 years old for the city of Imperial Beach. Just last week he retired as Marine Safety Chief after being part of many positive changes in the city.

Stabenow moved to Imperial Beach with his parents from Marshalltown, Iowa, when he was 5 years old and grew up swimming and surfing. At Mar Vista High School he was president of the surf club and was also on the swim team.

Around the age of 13 or 14, Stabenow became a close friend with another surfer, Serge Dedina, now the city’s mayor. “He had a big part. He got me involved in swimming and surfing. We shared all that,”said Stabenow. “It’s strange where life took us. Serge is now the mayor and me the safety chief. We have a strong connection to the ocean. Becoming a lifeguard had a lot to do with Serge.”

At the time when Stabenow was hired as a seasonal lifeguard there were no full time positions. During the winter Stabenow was a student at Southwestern College where he got an Associates degree in computer science. Three years later he and Dedina were hired as lifeguards at Silver Strand State Beach where Stabenow spent the next eight years. “There I went from Lifeguard I to II and took over the Junior Lifeguard program. We had two sessions with 110 kids in each session at one point…I took over in 1991 and ran it for the next two years,” he recalled.

In 1994 he recalls the Port District took over the Tidelands in Imperial Beach and opened up the position of lifeguard lieutenant. “The Port wanted to provide quality lifeguard service and needed a lifeguard to come and develop a program. I applied and was selected. I was the only full time lifeguard lieutenant. Everyone else was still part-time,” he said.

When Stabenow was hired, the working conditions were not optimal for lifeguards. The old lifeguard station was at Palm Avenue and there was a sort of box on the pier where the lifeguards watched the beach and had no protection from the sun. “We didn’t have radios, we didn’t have binoculars like we do today, no personal water crafts. The lifeguarding was done out of rusty dilapidated vehicles,” recalled Stabenow.

To communicate the lifeguards had a large wooden box which had the CB radio inside and weighed 50 pounds. “It was quite difficult at the time. The jeeps had not roofs and the lifeguards were driving up and down the beach [to patrol.] When I came in, the first thing was to get a lifeguard tower… In 1996 we purchased four nice, new fiberglass towers,” he said.

The new lifeguard station was built in 2000 funded by the Port. “Over the last 25 to 26 years the changes have been due to the support, vision and general concern of the Port, especially two port commissioners Frank Urtasun and Dan Malcolm who had the vision of Pier Plaza, Dunes Park. Without their help Imperial Beach would be a different place,” Stabenow said.

He recalls the days when Pier Plaza was a parking lot for beachgoers but also a place where people did drugs and gang members hung out. These days it’s a different place where cheerleaders hold their practices and teenagers hang out, Stabenow said.

Surfing the Tijuana Sleughs was the test of being a strong swimmer and being able to a lifeguard. He was of those surfers. “Back in the 60s and 70s you surfed without a leash. ‘When the waves broke two miles out and when you lose your board and have to swim in and back out you are ready to be a lifeguard,’” is what he recalls legendary Dempsey Holder saying, when he was head lifeguard in Imperial Beach.

Stabenow loved the lifeguard lifestyle of surfing and traveling during his time off. One of the many trips included going to Peru in the late 1980s. Stabenow took a bus from Tijuana and stopped along the way and had many adventures going through the many countries. It took him a month and a half to get to Peru with all the stops. In Peru, he met up with Dedina and his future wife Emily and stayed a month and half and visited many sites like Macchu Picchu and hiked the Andes. “A lot of memories,” he said.

When Stabenow was first hired as marine safety chief, the lifeguards was a division of the Safety Department but when City Manager Andy Hall came on board, a decision was made that the safety department was too big and the lifeguards had to have their own department.

Stabenow had 45 lifeguards working for him with nine full-time, which means they are there to protect beach goers in the winter as well. The winter is the most critical for safety and the full-timer lifeguards are highly trained, including river rescue and scuba dive trained. “The department has grown so much in the last 25 years. We’re one of the best in Southern California,” he said.

Stabenow pointed out that in the late 1990s the different lifeguard agencies all came together for shared training and to decide the direction of the lifeguards for the future and “provide the same level of public safety…back in the 70s and 80s every city did it on their own…now there is increased professionalism and expertise,” he said.

The staff of the department today is different then the old days. “They are young adults who surf all the time, are on the water polo team, are well trained to do that profession and work in the summer while going to college,” explained Stabenow.

In 2004 Stabenow went back to school with the city’s help for a BA in business management from the University of the Redlands.

After running the junior lifeguard program at Silver Strand and being hired in Imperial Beach Stabenow was asked to create the same program in the city. “The person who put it together was (current councilman) Bobby Patton. This year we had to cancel it [because of the pandemic.] It would have been the 25th year,” said Stabenow.

The biggest challenge for Stabenow over the span of his career has been the cross border pollution. “The water quality is the worst thing in the world for this community, surfers and people get jobs as lifeguards to promote going into the ocean but when we have to tell people the water is polluted, it’s the biggest challenge in the world,” he said. “The mayor has a lot of passion and energy to get this under control.”

Stabenow and his wife Sara, to whom he has been married since 1991, had a trip planned for the fall that would take them to Italy and Germany but he recently canceled it because of the pandemic. The couple has two grown children.

“I look forward to spending quality time with my wife traveling, relaxing and enjoying a stress free life, a good quality of life,” he said.

“Robert Stabenow dedicated his life to the task of making sure that everyone has a great and safe day at the beach in Imperial Beach. He was responsible for professionalizing the service and transforming it into one of the finest lifeguard agencies in Southern California. We wish him well in his well deserved retirement,” said Dedina.

“IB is my community. I’ve been here since I was 5 years old and since 1994 being able to make decisions in regards to our community, to make it safer for friends and community… Being part of the change, I’m so proud of it. My favorite part has been the lifestyle too. I live two blocks from the beach and for the last 26 years I walked to work. The work environment… with like minded people, staying healthy, fit. I loved my job. I was lucky to put myself in that place. They have been the best 26 years of my life,” he said.

Sorry, there are no recent results for popular articles.