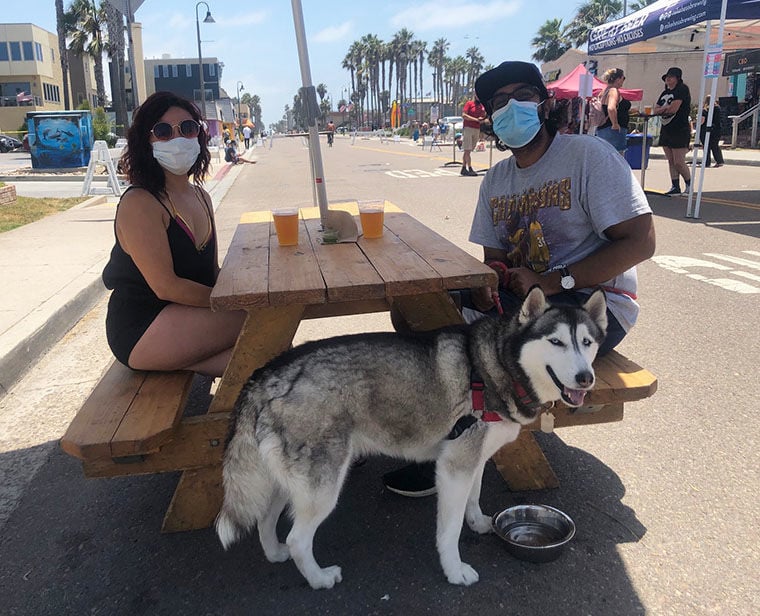 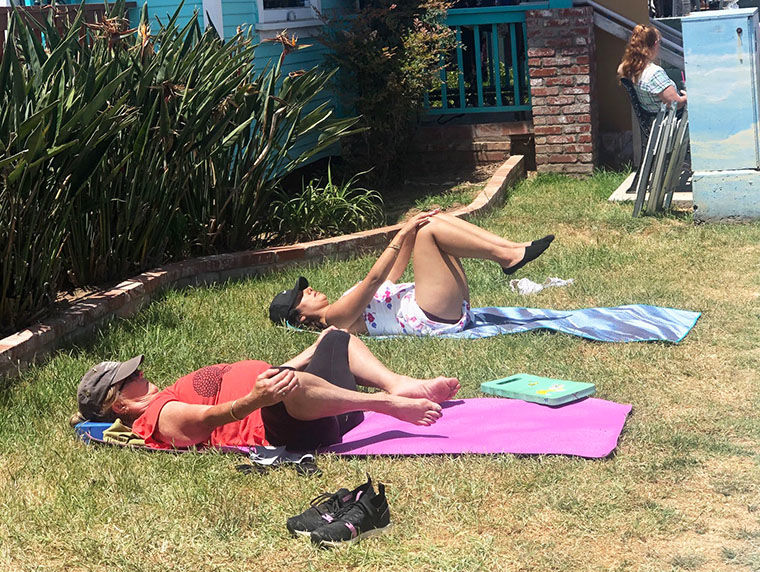 A yoga demonstration next to Vitamin Sea Wellness with students 6 feet apart took place during Safe Streets on Memorial Day weekend when three blocks of Seacoast Drive were blocked off to allow businesses to expand into the street.

A yoga demonstration next to Vitamin Sea Wellness with students 6 feet apart took place during Safe Streets on Memorial Day weekend when three blocks of Seacoast Drive were blocked off to allow businesses to expand into the street.

It could have been a normal Sunday on Seacoast Drive with locals and visitors strolling, enjoying a meal, and shopping. Except for the masks people were wearing.

This past Memorial Day weekend from Saturday through Monday, the city created Safe Streets. closing off three blocks on Seacoast Drive, from Date Avenue to Elder Avenue, to motor vehicle traffic to create a safe area and maximize space. Only pedestrians were allowed and restaurants placed tables on the street for safe distancing and shops could display their wares and products on the sidewalk or street.

From the faces of the attendees everyone was happy to be out and do something they haven’t been able to do since the pandemic started.

Councilman Mark West had suggested the idea during the last council meeting. “We have talked about doing something like this for a long time. For three things: Memorial Day, people have been in their homes and our businesses are getting ready to open…I want to make sure people can come to the beach, maintain physical distance and enjoy themselves,” he said.

“It all came together Thursday night,” explained Mike Hess. “I didn’t have it planned out until Friday afternoon…people are calling to do this every weekend.”

Hess has kept his brewery and food partner City Tacos open through the pandemic, reorganizing and opening on day two of the stay at home order with take out and delivery. His business has been down 85 to 90 percent, which means his employees have suffered too. Hess employs mostly IB residents. In fact 13 out of 15 live in the city and mostly they ride their bikes or skateboard to work.

To get ready for the special event this past Memorial Day weekend and complying with the 6 foot distancing, Hess rented awnings and tables so he could have 4,000 square feet under a canopy. He also extended the eatery and brewery onto the street with some regular tables and belly up tables. City Tacos had a cooking station right in the street.

Safe Street was held from 11 a.m. to 6 p.m. Saturday through Monday and Hess offered a $10 deal which included two tacos and one draft.

Ely Sanchez of Imperial Beach and friend Avindra Chandrasena of National City and dog Arya were sitting at a table in the the street. “I like it. I like the fact that it feels more normal. We still have to be cautious with each other and keep distance. It’s still a little risky,” Sanchez said.

She found out about Safe Street the day before when she was riding her bike. “I thought it was a get together by the two breweries. I didn’t know it was happening,” she said.

Vitamin Sea Wellness owner Kimmy Nolan had a booth selling CBD, clothing and skin care products. “We can engage more with the customers and can serve them at a safe distance,” she said of Safe Streets.

Next to her booth, a yoga demonstration with students placed 6 ft apart on mats was also going on. “This cuts down on cruising traffic and makes riding bikes safer with more opportunities for exercise,” she said.

Tony Daniel of Imperial Beach goes to the Seacoast Drive to walk regularly and he was pleased to see the street closed to traffic. He liked to see people smiling and seeing lots of kindness going on.

“Restaurants have more opportunity for business. The town has come back to life. It’s a nice way to wake up,” he said.