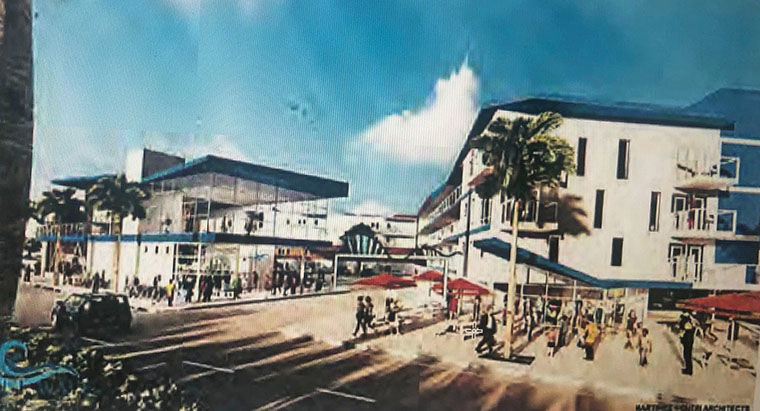 A new hotel/residential project called Blue Wave was approved by the city council during the last meeting. 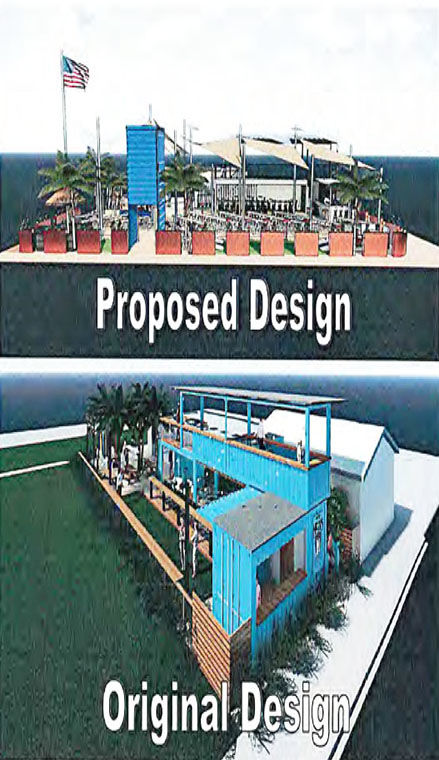 A new hotel/residential project called Blue Wave was approved by the city council during the last meeting.

In a marathon city council meeting on June 17 that lasted six hours, a number of important items were approved.

A new hotel/residential project called Blue Wave was proposed for the former El Camino Motel site at 550 Hwy 75, which was demolished in 2012. Forty seven rooms are proposed with 19 micro units, 20 standard and 8 deluxe. Thirty of those units are low cost accommodations and 17 will be market rate. Planned are also 51 very low income residential units. A 44-ft height limit is proposed with a few areas extending beyond like the parapet wall and the elevator shaft. A shuttle will be provided to and from the Navy Campus. In addition there are 106 parking spaces for vehicles, 14 for electric vehicle stalls, and 13 motorcycle stalls. The Z-shaped four story building’s square footage is 40,149 with commercial space on the bottom floor.

Councilman Robert Patton asked the developer about Short Term Rentals. “Is there anything you can do to prevent that from happening?…What I want to hear is no short term rentals.”

After some discussion with the developer, it was agreed that there will be nine units on the second floor which could be rented out as hotel rooms. It was pointed out that the 30 units which are low cost accommodations are proposed due to the fact that the new hotel is replacing a low cost motel. The Coastal Commission required the replacement of the 24 low cost units and the developer decided to go beyond that number with 30.

Councilman Ed Spriggs said he was concerned about parking and wondered whether it will affect the neighboring community. As part of the new Local Coastal Plan that was going to be voted on later in the meeting, a new project that doesn’t have enough parking must do a parking study and the developer of Blue Wave has done a parking study.

Councilmember Paloma Aguirre questioned the developer about future employees. She asked whether a living wage versus minimum wage would be offered, whether locals would be hired, and if there was a plan on hiring workers full time and offer public transit passes.

This item was approved unanimously.

The project of Mike Hess Brewing, at 805 Ocean Lane was originally approved Aug. 2, 2017 but due to the fact that the owner was able to acquire a lease in the front property, a new design was presented to city council.

The new design was approved unanimously with changes; the entry container cannot exceed 13 feet, permeable material for flooring (not decomposed granite) will be used, signage is to be consistent with code, and shade trees were chosen versus palm trees. Councilman Mark West recused himself.

Twelve residents of Siesta RV park spoke on the issue of the park closing, expressing their concern about their future and the notification by the owner. City Manager Andy Hall said the city will make sure the owner follows all the state statutes, which the park falls under. Some of the residents said their trailer is too old to move, some believe they will become homeless.

Circulate San Diego made a presentation. Their focus is to advance mobility, making biking and walking more available to communities. The organization’s executive director presented Vision Zero, a new program to eliminate fatalities and injuries. The program can be implemented using a number of ways starting with engineering, building safer streets, education for pedestrians, bicyclists, scooter riders and car drivers. Also educational programs in schools involving the Sheriff’s Department and the use of data driven approach with location of accidents are ways to help the program be successful. Vision Zero was adopted by the city of San Diego in 2015. It was suggested to include this program in a future council meeting for a vote.

The consent calendar was approved unanimously.

Mayor Serge Dedina spoke a few words after the public comment period. One of the speakers claimed that the city of Imperial Beach should physically do something about the sewage flowing into the river and the ocean. “There is a reason why the city filed a lawsuit against IBWC asking them to put diversion infrastructure on the U.S. side…if the city of IB decided to use its one machinery and carry its own action on U.S. property we could be arrested and put in jail. There’s reason why we’re in court. There’s a reason why we have decided to engage Mexico. We’ve decided we should not lose any opportunity with any agency…We have taken a leadership role to protect our residents,” said Dedina. He also said that he and council member Paloma Aguirre have had a meeting at IBWC and were told that the city had to spend its own money if they wanted to fix the problem. “Is the Mexican government off the hook? Absolutely not. During a press conference last year I called the Mexican governor a crook and was advised by the Sheriff’s Department not to go to Mexico because of potential threats,” he said. Spriggs commended the leadership of the city and suggested making investments in infrastructure part of the negotiations of NAFTA.

An ordinance to allow electronic filing of campaign disclosure statement was read by title only and was approved unanimously.

A faux tree and wireless communication facility and equipment shelter at 764 13th Street was approved unanimously. Patton was temporarily absent.

Final Negative Declaration, Mobility Element and Climate Action Plan for the Resilient Imperial Beach Project were approved unanimously as three separate items. The Mobility Element is state mandate as part of the general plan. This includes a description of the city’s transportation network, goals and policies to address safe and efficient operation, maintenance and management of the transportation network for movement of people and goods. The Climate Action Plan is a strategic framework for measuring, planning and reducing greenhouse gas emission and mitigation measures. The city was awarded a grant of $225,000 from the Coastal Commission to update the Imperial Beach Local Coastal and SANDAG has required cities to adopt a Climate Action Plan and a complete streets policy by July 27, 2019. The Negative Declaration addresses potential impacts to satisfy California Environmental Quality Act and none were found. Hall pointed out that the city will be one of the first to join in, having 100 percent renewable energy for city buildings. The goal is for the city to have 100 percent renewable energy by 2030 and installation of class 4 bike lanes. A speaker from Climate Action Campaign and Southwest Wetlands Interpretative Association suggested that the city take more aggressive approach to the reduction of greenhouse gases.

Chris Helmer, environmental & natural resource director explained that the city has applied for a grant for the enhancement of Veterans Park. The project includes: the renovation of the playground and play structure; planting 40 trees, construction of two pocket parks on Encina Avenue, renovation of the irrigation system, new landscaping, new surface at dog park, a SEAL dog memorial, renovation of ADA paths, and building 10,000 square feet of storm water bio-retention area. The budget for the Veterans Park project is $ 8,925,000 and includes $7.9 M is statewide parks grant, $1 M in match from the city, $25,000 private contribution from Navy SEAL Museum Foundation. This item was approved unanimously.

The agreement with the Boys & Girls Club and the city was renewed with the change of renewing the agreement month to month rather than yearly basis. The city helps maintain the facility by contributing $50,000 for water and power expenses. A motion to approve was carried unanimously.

Review of Fiscal Year 2017-2018 was performed by an independent auditor to look at the city’s finances. It was reported that there were some closeout procedures that were done incorrectly and some expenses were reported in the following year. “We’re implementing new closeout procedures to make sure everything is accounted for going forward, there were not financial fundings,” said Hall. The citywide revenue in 2018 was $28,257,554 and expenses were $31,621,954. Citywide expenses exceed revenues by about $3 million due to the completion of several capital projects. Citywide expenditure came in below budgeted amounts.The general fund unassigned fund balance was $7,687,183 or 38 percent of the general fund expenditures. This fund is the most important because it allows the city council to appropriate funds for unexpected events.

The next city council meeting will be held Aug. 7 at 6 p.m. in the council chambers at 825 Imperial Beach Boulevard.

Learn everything about David Muir here. David Muir salary, marriage, boyfriend or a wife. All details are covered in this article .is david muir gay

It is in reality great what number of humans nowadays are deciding on herbal fitness care merchandise for their nicely-being.

how to lose weight fast naturally

It is in reality great what number of humans nowadays are deciding on herbal fitness care merchandise for their nicely-being.

how to lose weight fast naturally

In this article, you will find the list of 10 best print-on-demand sites similar to the web site RedBubble and can get a lot of stylish options. .10 BEST sites like RedBubble

If you are looking for the complete procedure of MyAARPMedicare Login guide and rewards, forgot the password, contact details, Plans. www myaarpmedicare com

Hotels need a lot of customized products. For instance, a cargo lift Alabama is necessary in large buildings. The normal elevator can not be used for carrying heavy cargo because, in time, it will damage. So, this alternative is the best one.