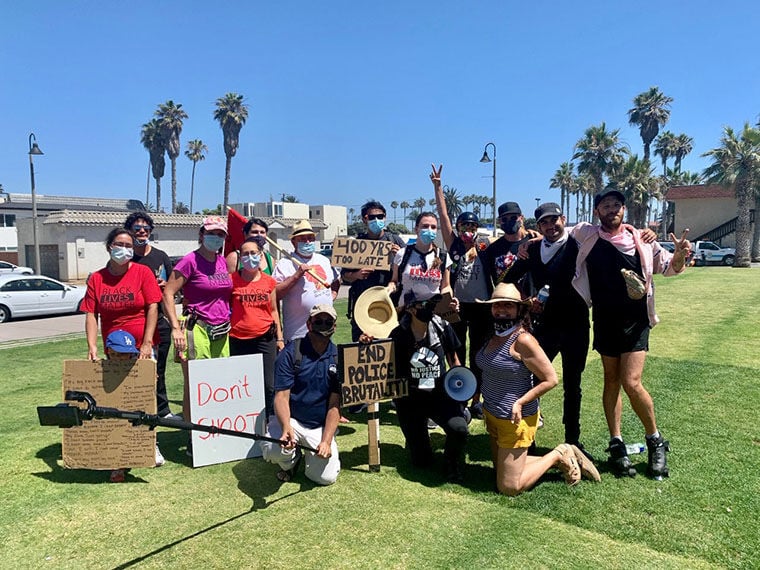 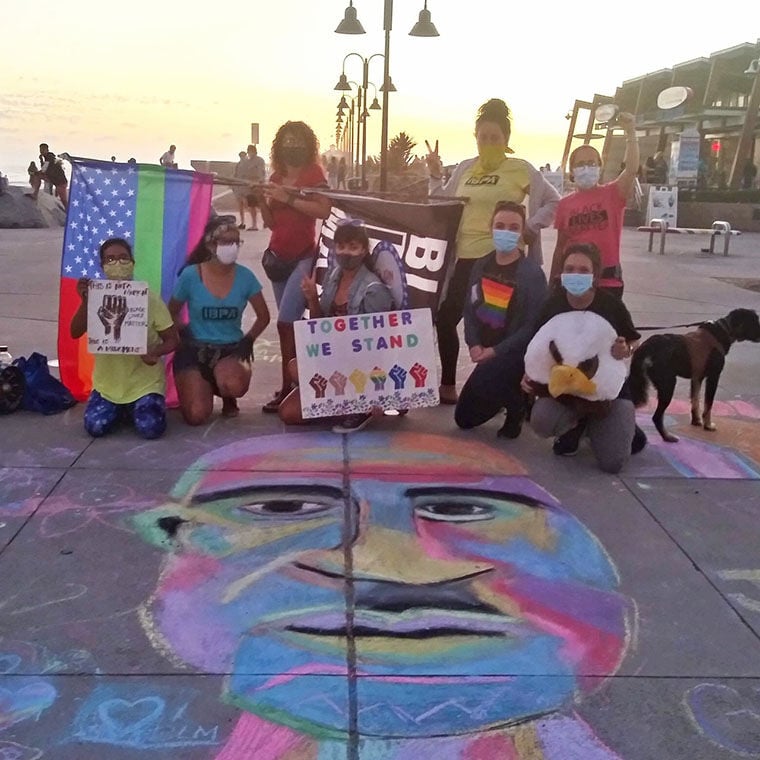 Imperial Beach People’s Alliance is a newly formed group who stands for social justice. The group has held various chalking events at the pier.

Imperial Beach People’s Alliance is a newly formed group who stands for social justice. The group has held various chalking events at the pier.

Social justice and equality for all is the reason the newly formed Imperial Beach People’s Alliance (IBPA) has been created. The group came together after witnessing an attack during a peaceful protest on June 7 on Seacoast Drive. The day had started when the group had gathered at Veteran’s Park and then marched to the pier. “It was very organic…at the end of the march we got each others’ contact information,” explained founding member Lauren Gaw.

The peaceful protest had been organized in support of Black Lives Matter. During the march, people threw eggs at the protesters and used slurs and one individual was sucker punched, an incident that was caught on video.

By the next day some of the protesters got in touch with each other and met. A Facebook group was formed that now has close to 400 members. “When we came together we talked about what our mission was, the name and what we wanted to accomplish,” said Gaw. That meeting also featured two speakers, Dr Keisha Clark and Lee Gray.

By the end of the week another peaceful protest had been organized. “We didn’t want folks to silence us, so we came back with an organized protest in support of justice for all,” said founding member Betty Sanchez Blevins. “We are not all anti-police, but anti-racist and for the community, in particular the underserved community and the ones affected by systemic racism. However, we will rally around any cause that is for the betterment of the community,” she wrote.

IBPA has organized chalking events on the pier featuring positive messages and art. Blevins and Gaw said passersby that just happen to see the group have joined them in writing positive messages. Many kids and teenagers have become involved in the chalk art and have supported the other causes the group believes in. More recently a number of Mar Vista High School students sent emails that were read at the last city council meeting in support of flying the pride flag at city hall. “This is what we want, youth to be involved as well as educate, listen, be productive adults in society. We need to be role models,” said Blevins.

Recently the group has been involved in having a voice in the Law Enforcement Ad Hoc Committee formed by the city to explore ways to diminish the services of the Sheriff’s Department and use the funds towards social services, education and parks and rec instead. That is important especially now during the pandemic when kids have less to do, to keep them busy so they stay out of trouble, explained Gaw, who is a nurse.

The issue of mental health and how it could be handled by professionals in the field rather than the Sheriff’s is a topic close to Blevins’ heart. Blevins, a public servant and author, has a loved one with a mental health issue. She said the Sheriff’s who reposted to a call did not know how to handle the situation that came up with her relative.

As part of the beliefs in social justice, IBPA has worked with an MTS committee and Councilwoman Paloma Aguirre to ask for support and help for low income residents who, if traveling with an expired pass, are stuck with a very large bill. Blevins recalled that when her husband moved here from New York and forgot to renew his pass once he was charged $600. “Imagine someone who is low income…it can break them. That’s the kind of social issues we’re talking about,” she said.

The group has created a GoFund me to raise $3,500 to create an anti-racist mural on a building on Palm Avenue and they are more than half way towards their goal. “We want to celebrate diversity, we want people to know Black Lives Matter,” said Gaw. She said the mural will help start conversations.

Blevins, who grew up in Imperial Beach and is Latina, said it took a long time to have minorities represented in the City Council. “I was raised here, it’s a wonderful community, there are people from all walks of life who tend to look the other way… systematic racism is rooted in the system. I’m not saying Imperial Beach is racist, but at the same time there’s room to grow. The system is functioning, but there are more opportunities with a mural that will show the diversity of the community,” she said.

Gaw explained the name IBPA came about because the group wants to represent the community, and wants to be inclusive not just of Black Lives Matter but is in support of all minorities. “We’re for the people, by the people…We’re an organization for social justice, racial justice and want to teach the community how to be anti-racist,” said Gaw.