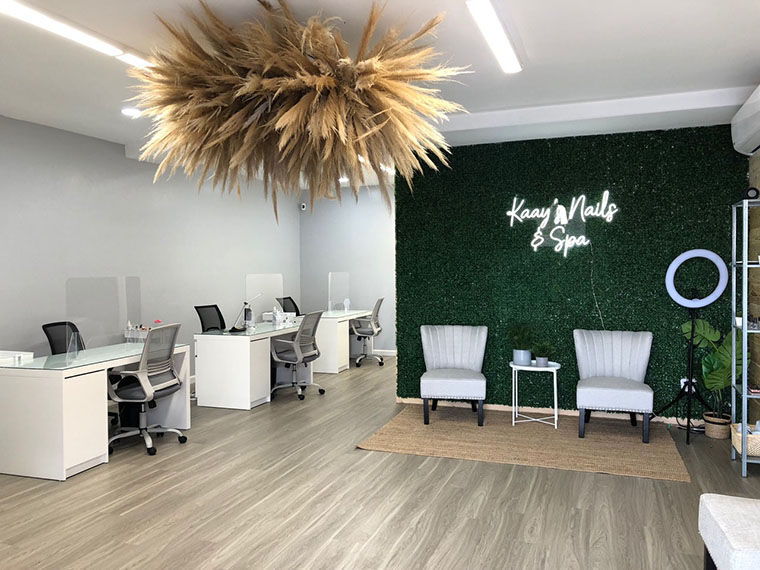 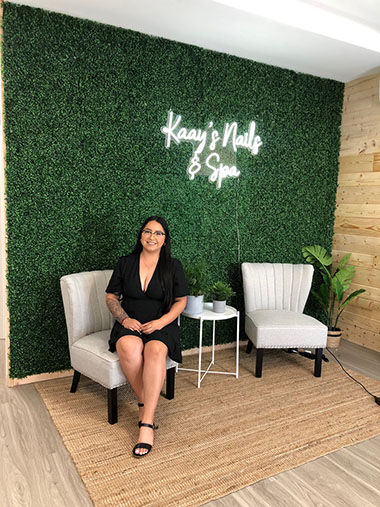 Karina Mejia has worked in the beauty industry for six years and at 24 years old she already owns her own business with the opening of Kaay’s Nails & Spa this past May.

Mejia has lived in Imperial Beach most of her life and after graduating from Sweetwater High School she went to barber school and worked in that field for a year, until she switched to nails. She attended nail school for six months and worked for a nail salon. When she decided to open her own business she looked for locations in her hometown.

“I like the area, it’s up and coming. I’m still living here. I found a place near my mom’s salon,” she said. Mejia’s mom has a salon just two doors down called Studio C.

Being in the salon business runs in the family. Mejia’s mom, Carmen, has been a hairdresser for many years and Karina grew up around salons since she was in third grade. Seeing her mom doing hair when she was a child, she was inspired, and when she was 9 or 10 years old she decided to try highlights on her dog. Mejia is the youngest of three siblings. Her sister, also named Carmen, works at her nail salon with her and offers spa services.

“Being in the beauty industry is something I always wanted to do,” she said.

Kaay’s Nails & Spa was a former Zumba and ballet studio and Mejia was able to change the space to her liking. While doing the remodel, she created a room for her sister to offer spa services. “It took us four-and-a-half months; we redid the floor, created two rooms, took out the pop up ceiling. I picked where everything should be, even the light switches and plugs,” she said.

Wanting to create a soothing atmosphere in her salon, Mejia used colors like grey and white, wood surfaces, an accent grass wall to draw the eye and pampas hanging from the ceiling. It’s not what the typical nail salon looks like. “We try not to be a typical nail salon,” she said.

There is also a selfie wall with a ring light where clients can take photos. The salon has four stations and currently only Mejia and another nail technician work there. Each of them has her own schedule and appointments are booked on Instagram.

“We are by appointment only, and it’s time specific for clients so there is no rush,” she said.

Mejia stays up to date with the latest styles and also offers hand drawing on nails. Mejia only offers women and men’s manicures. She specializes in Gel X nail art for her manicures. Using this method, nails look like acrylic nails but they are actually made of gels. Mejia uses no liquids or powders, and no glue and there is no odor in the salon.

“It’s better for me and the clients,” she said. “Clients love it. It’s so much better for the nails, there is no damage and they last longer. They are also thinner not bulky like acrylics,” she explained.

Because Gel X is such a new style and not widely available, her clients come as far away as Santee and Poway to get their nails done by Mejia. Many of her clients have found out about the salon through Instagram and booked appointments.

Mejia loves to talk to her clients and get to know them personally. She also likes the variety of her work. “I like talking to people, every single person I do is different. I’m able to be artistic,” she said.

“A lot of people are surprised by my age. I’m also the first Latina owned nail salon in Imperial Beach. A lot of people here speak Spanish and it’s easier to explain what they want in Spanish,” she said.

The salon sells a few items including cuticle oil and nail removing kits.